Let’s be honest. When you think of CrossFit, rowing probably isn’t something you think of right away. You likely think of barbells, box jumps, pull-ups, and maybe even things like wall balls and double-unders. But, what about rowing?

Unless you write your own programming, rowing tends to be one of those movements that just happen to pop up every now and then. You may not like it, but at the same time, you might think, “hey, it’s not burpees!” and proceed to sludge through it, not expecting to see it again for a while.

For whatever reason, rowing doesn’t seem to leave that lasting impression on us in the way the pain of thrusters or the excitement of heavy deadlifts do. However, if you were to actually take notice of how integral rowing is to the CrossFit programming methodology, you might be surprised to recognize its importance as a staple to training.

Whether you work out to be healthy for everyday life or to compete, understanding the importance of rowing and how crucial it is to your training can help you not only embrace workouts with rowing in them but help you improve your scores in those workouts, as well as make you a much better athlete overall. Let’s take a look at the data…

The History of the Indoor Rower

Rowing as a sport goes all the way back to the early 1700’s, and as an Olympic sport since 1900. Eventually, rowing machines were built for training by the ancient Greeks using the hydraulic damper setting design in the mid-19th century and the friction brake design in the mid 20th century, all the way to the 1980’s when Concept2 introduced the first air resistance ergometers to the market.*

Started in 1976, Concept2 is now celebrating their 40th year in business. By providing the ability to accurately measure performance combined with easy transportation, Concept2 has helped create the sport of competitive indoor rowing as well as revolutionize the training process for watercraft rowing.

Throughout the years, Concept2 has refined their machines:

As a low impact training method, rowing uses 87% of your muscles, making it one of the best full body exercises available. It is also one of the first pieces of workout equipment to measure exact power output.

The History of Rowing in CrossFit

By the time CrossFit.com showed up on the “Information Super Highway” in February 2001 Coach Glassman had established a training program where improvements were constantly being made. But, one thing was for certain; it supplied constantly varied, functional movement at high intensity.

When you flip through 15 years of any training program you’ll be amazed. But looking through the history of CrossFit, it’s not the massive amount of information that is fascinating, but the evolution and improvement as a result of the endless work that went into it. Only a fanatic could put that much effort and thought into the big picture of such a structured program.

In the first week of CrossFit.com programming, the 4th workout of all time included rowing. On January 13, 2001, the following session was part of the workout:

Rowing in CrossFit By the Numbers

The CrossFit.com website has posted workouts every day for 195 months now. Out of those months, 168 included rowing. Meaning 85% of the time there was a Concept2 rowing machine involved in a workout in one way or another.

In the years following, the rowing machine maintained its space as a staple tool in the programming. After hitting the lowest number of rowing workouts in 2008 (only 12 workouts that year) and 5 months straight without the sound of the flywheel the numbers started climbing. Coincidentally, 2008 was the only year in the 11 years of CrossFit Games history where rowing was not included in any event.

In the past few years, rowing workouts have averaged just below 12% and are continually increasing.

Since the start of The CrossFit Games in 2007, one year in particular sticks out regarding rowing. In the first 2 months of 2014, 12 workouts accumulating almost 50k meters on the rowing machine were published. Not surprisingly 2014 was the year rowing showed up in the CrossFit Games Open. Between the 2013 and 2014 Open, total rowing volume adds up to 100k meters showing that programming on the CrossFit website is a clear indicator of what is to come.

Breaking the years down by months, you can see the first six months typically include more rowing than the last six. You can see that in preparation for the CrossFit Games season the volume is higher and tapers by July. Baselines are then set again in September and October.

Concerning workouts domains, more than three-quarters (76%) of rowing workouts are for distance, 23% are for calories and less than 1% (4 workouts) were for time. In recent years number of workouts for Calories keep increasing.

Two-thirds of workouts include some kind of transition (getting in and out of the rowing machine more than once), while one-third of the rowing workouts only required strapping into the rower only once. It is clear that the use of the “quick release” is extremely important during these workouts.

Just as much as the majority of rowing workouts are for various distances, you can assume the number of AMRAP and TABATA workouts are fairly low, representing only 20% of the total workouts.

Reading through almost 400 rowing workouts we can name a few personal favorites, but we’d rather give credit for the ones in the beginning of the online programming and give appreciation to Coach Glassman for the short, but rather descriptive objective. On April 14th in 2002, a simple 5k showed up with the objective of “Row as though your life depended on it.” 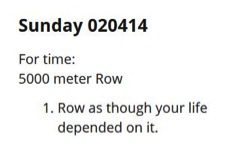 The top repeated workouts on the CrossFit main site are:

The Masters and Teens qualifiers behind us and The Regionals is just around the corner (starting this weekend) with all Individual and Team workouts announced, we can clearly say that rowing cannot be neglected. 2 out of 16 total announced events is utilizing the Concept2 rowing machine, proving once again that it is an integral part of CrossFit as a sport.

It is easy to measure, hard to cheat and practicing it can improve your overall fitness. By learning the proper technique, strategies, mental preparation, and understanding how the rowing machine works, it can be your most helpful tool in developing the well-rounded physical ability to perform across broad time and modal domains we strive for. By knowing the history of rowing in CrossFit, you can structure your training to achieve such results!

*The History of the Indoor Rower – https://physicalculturestudy.com/2016/05/06/the-history-of-the-indoor-rower/

You’re using your big muscles – your quads, your chest, your shoulders, your biceps, and you can change the grip positions to work different things. You can even do your abs because you can use it almost like a Pilates reformer and do crunches. You can get a really good all-body workout from a rowing machine. 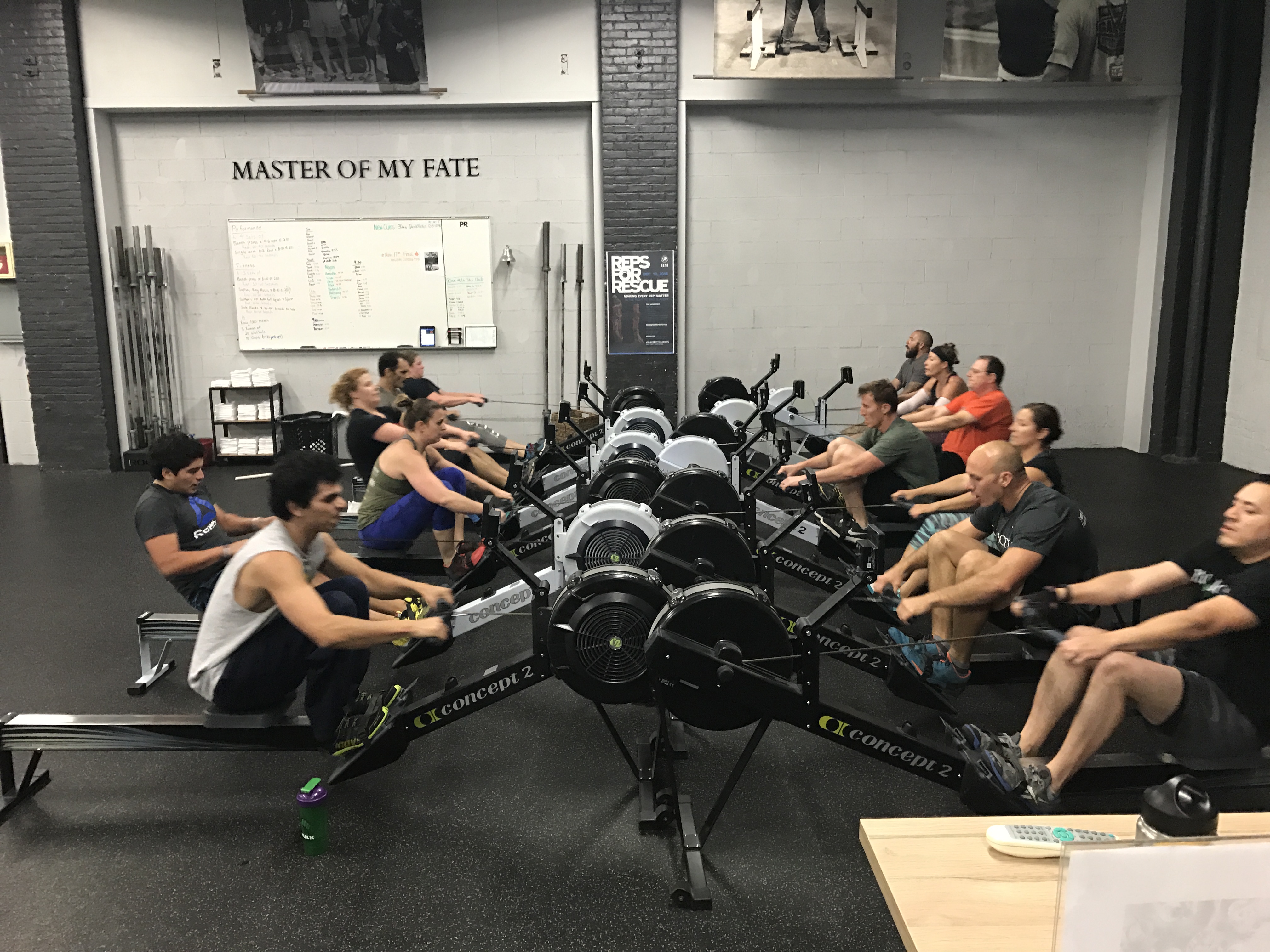 Which Cardio is Best: Rowing Versus Swimming
Previous Article 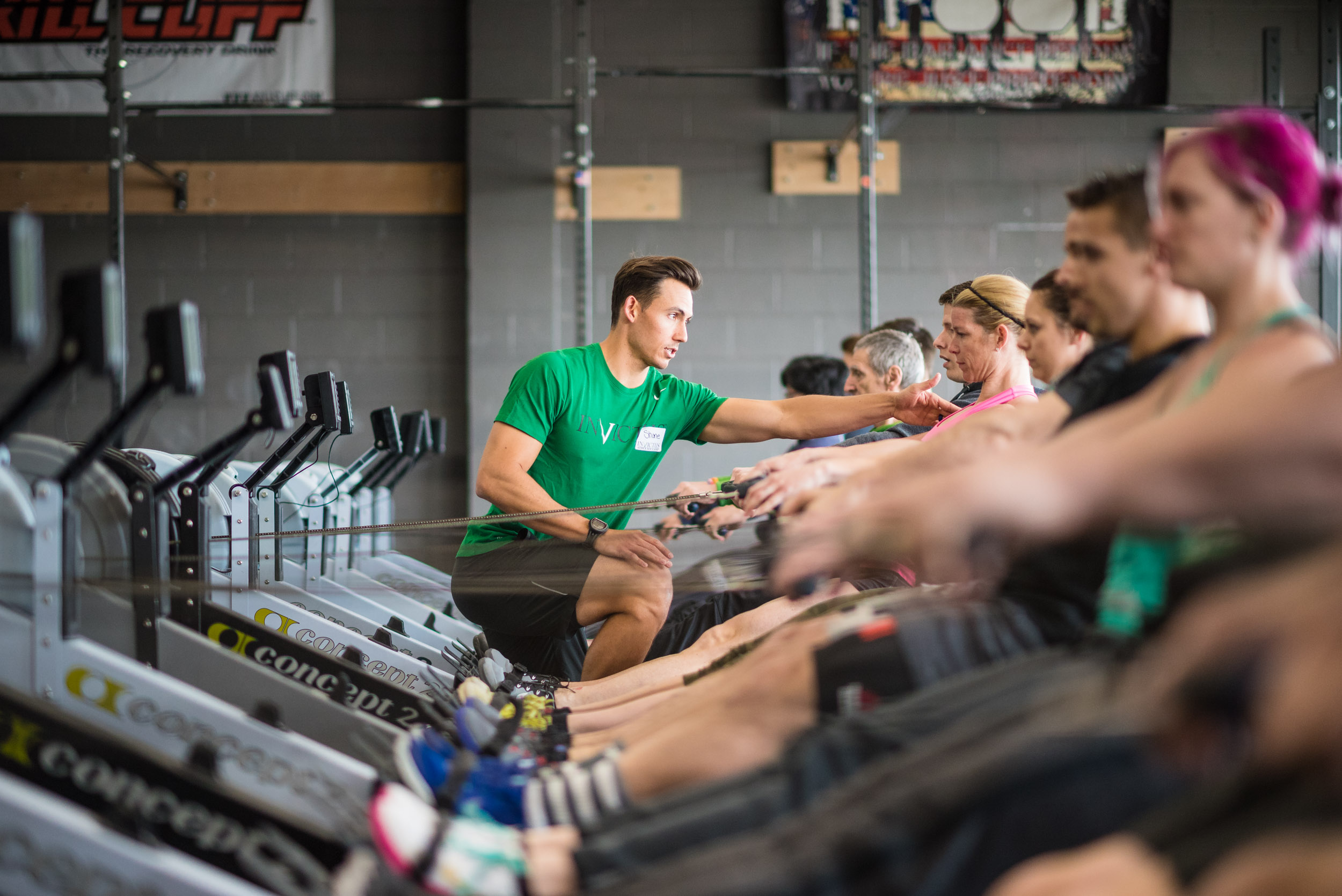