When I first started to work on how to find out an athlete’s potential in indoor rowing, I looked for examples and stumbled across some of the fastest times in the sport. You don’t need to look much further than the 100m World Record to find one of the most powerful indoor rowers ever, Ross Love.

Ross is not only a great athlete, but a great husband, father and coach. We were messaging each other for a while about the sport and I wanted to know what makes someone push so hard to reach the pinnacle of any sport — World and American Records — and wanted to know what sets him and his training apart from others. The 32-year-old, 6’4”, 260lb giant from Friendswood, TX was extremely kind to take time to sit down with me for a quick interview.

Andras Hordos: What sports were you doing before rowing?

AH: As one of the most powerful Indoor Rowers of all time, which of your personal records are most proud of? What do you think sets you apart?

RL: I believe my overall competitiveness sets me apart. Willingness to push myself harder than anyone else. I don’t like to lose at anything. Gift and a curse.

RL: I do think it’s possible but I don’t think anyone currently rowing has the potential at the moment. It’s definitely going to take a unique combination of size, strength and conditioning along with a little luck.

AH: What is the most impressive indoor rowing performance of all time and why? Which record would you like to own and why?

RL: It is a toss-up between the 500m because of age of record and 2km simply based on the fact that it’s the most commonly tested distance in rowing and seemingly no one even flirts with beating it.

AH:The 100m world record was announced in 2016. In the past 2 years many tried to attempt to take it from you but you kept taking it back. Do you think there is a limit for the 100m WR?

RL: Of course, there is a limit. I don’t see anyone rowing a sub 12 second on 100m without serious modifications to the rowers themselves, but I definitely think beating 12.78 seconds is achievable. I believe I would have bettered my 100m a few more times given the opportunity.

AH: It took you only 13 strokes to own that 100m WR. What do you think it takes to beat your record? What was your philosophy about the Record attempts? Is there a right time?

RL: A ton of factors need to be taken into consideration when sprinting. People just assume you close your eyes and pull as hard as you can every stroke. Those are people that do not understand sprinting. Everyone assumes that for the 100m sprint the damper should be set on 10 to get the best time or that you should use your legs as much as possible… all misconceptions. Fast Twitch Development of the lower and upper body, an idea of how to properly use the glutes and hamstrings, flexibility and also a combination of coordination and athleticism is needed. Strength plays a huge factor but you have to also rate the machine up so speed is as important as strength. Flexibility is more important than length. If you look at my stroke I am operating from a reach to an upright position. there is no leaning back on the 100m. My stroke is actually short compared to the way I row any other distance. The goal is to get back to the catch as fast as possible to restart your pull and using the strongest muscles in your body (glutes and hams) to power that movement. I think about sprinting like I do any Max Effort Lift. It needs proper preparation and adequate recovery before attempting a max effort sprint. You wouldn’t Max out on bench press multiple times a week and expect to make progress or avoid injury. So, I usually try to prep for the 100m weeks in advance and taper accordingly leading up to an attempt allowing my body to rest but not become stale.

AH: Do/did you have a coach?

RL: Not for the 100m, but yes, I did have a coach for the 500m (Pete Marston) and then Sam Blythe programmed me for the 2k leading up to Crash B’s. both great guys and they both helped me in different ways. Also, Leo Young has offered some guidance here and there to me. I appreciate everyone’s help.

AH: What did your training regimen on the erg look like leading up to your WR attempts? How many days of rowing? Time spent on the machine? How long was your training for the WR attempts? (As far as I know you attempted 100m two times and the 500m one time)

RL: For the 100m I try to keep the volume low and treating it like a Max Effort lift. You only have so many quality reps per week before things start to get counterproductive. Much more volume went into the 500m. I did a few 4-6-week long training cycles. I feel like I never got to do it enough to really know what works and what doesn’t work. I had some really fast days and some slow days just like anyone else would. I remember my best day being 350m at a 1:08 split, then having some days where I could barely hold a 1:10 split. Frustrating that I feel I was never able to maximize potential due to old injuries. I have done a few more attempts of each distance.

AH: Are you making a comeback now? Are you going to attempt any World Records?

RL: I’d wouldn’t call it a comeback rather a post injury training, but we will see where my current rowing workouts leads me. If it seems like a good time and my preparation is going as expected I’ll give a shot for a World Record…or a few. (laughing)

AH: What other supplemental training are you doing? Strength, cross-training etc….

RL: Unfortunately, very little of anything. I have a very large herniated L5, 1cm, and it doesn’t allow for much load bearing on my spine.

RL: Now, I follow a mainly Ketogenic diet and I feel like I have less inflammation and my body recovers now better than ever. I have been rowing every other day with nearly no pain at all. So, I can say my Recovery has been solid lately.

RL: For the first time in 4.5 years (pre back injury) I am taking my nutrition seriously. In fact, I have lost about 50lbs. My current training and nutrition is that of someone trying to develop a summer body not one that supports performance. I have barely taken as much as a protein shake in the last several years. But recently I have gotten involved in a company called ID Life. They are the only company in the world that offers customized nutrition based on your individual needs as a human. I cannot say enough about what these supplements have done for me.

AH:What is your life looks like now? As far as I know you own a gym?

RL: Currently I’m in the process of opening a new, larger gym. Very Exciting times in my business life. At the moment, everything is trending up.

AH: How do you balance fitness and life goals?

RL: In the past, not very well. I have to admit I am an ‘all or nothing’ kind of guy. I have poor balance. Massive attention or massive neglect. I try nowadays to give an even split between family, business and personal goals. It’s tough with my personality.

AH: What about the beard? Why no mustache?

AH: What are your hobbies outside of the gym and fitness?

RL: I spend a great deal of my time at the gym and what’s left of my time goes to my family. I like to travel and I really like to go to other gyms (pretty boring, I know) and experience what they do in their profession. I always visit other gyms when I’m out of town.

AH: What motivates you? Where does your drive comes from?

RL: I don’t like to lose. Anything I do, anything I put time into I like to be as good as I can. That’s where the all or nothing comes into play. It can become more of an unhealthy obsession but I do believe in order to be “great” at something you have to be obsessed and if I’m not going to put that kind of attention and effort into it then I’d rather be drinking beer!

AH: What are you most proud in your life?

RL: Hands down, my family, my son, my responsibilities as a father. Anyone that follows me on Instagram can see that. I enjoy making them happy.

AH: Who inspires you?

RL: I am inspired by my mom and dad to be a good husband and father. Outside of them I have never really looked up to anyone. I try to be my own man. Set a strong example for young kids and others that look up to me. I’m not saying I am not impressed with other people I have just never wanted what other people have. I have been blessed by a great support system from my family. I give thanks for this every day.

RL: I enjoy competing, if it’s not rowing or even something in the athletic realm it will be something else. I believe competition is what drives me to be successful in many other aspects of my life. I need it in order to be satisfied as a human being, sometimes to a fault. I have tried to be less this way as I have gotten older, it hasn’t worked so instead of being less competitive I have just tried to focus that energy in other aspects of my life that isn’t necessarily Athletics.

After we hung up the video conference I couldn’t stop thinking how positive Ross was. Besides his never ending smile the man is pure……Love. And just as much he was positive, his competitiveness showed just as much. If you are in Friendswood, TX visit Peak Performance Warehouse and say “hello” to him, and if you dare, challenge him on any distance on the rowing machine…he will be ready to show you that everything is bigger in Texas — even the Love of Rowing. 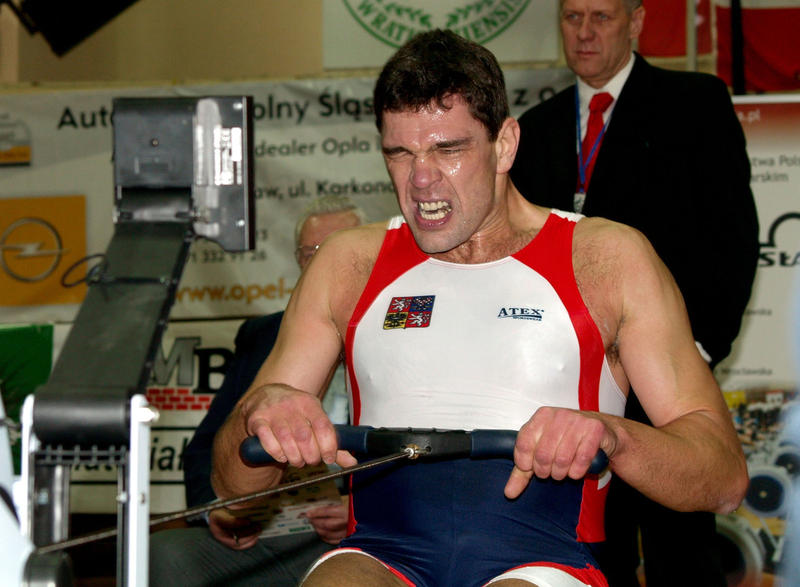 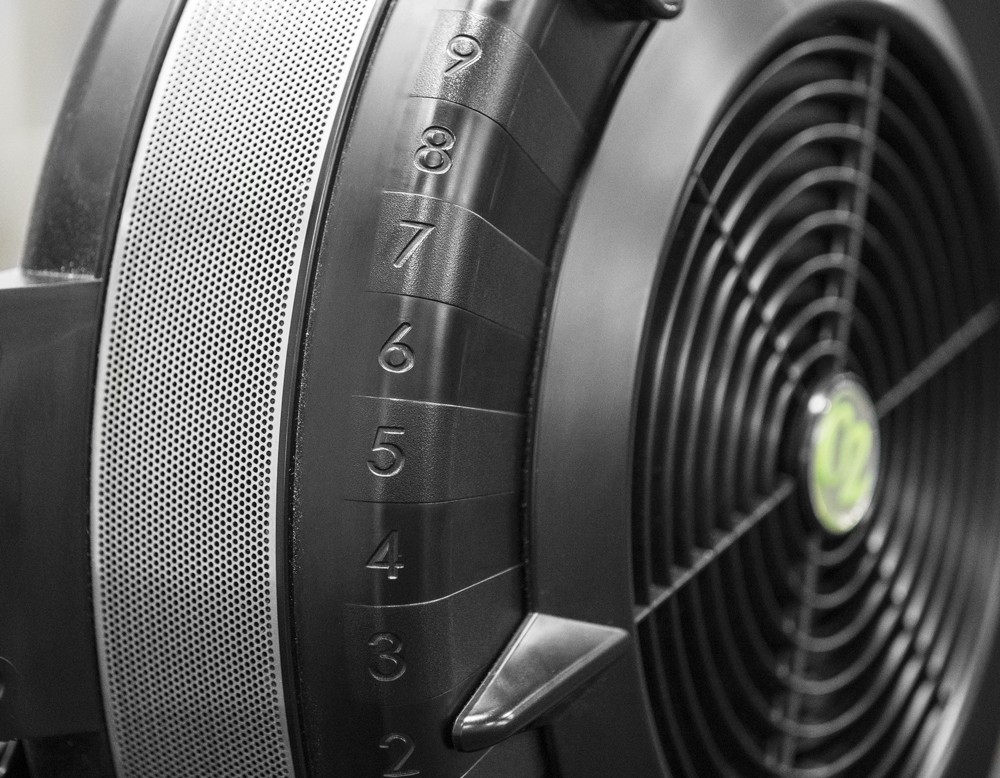